The following is a list of primary sources I will be using for my final project.

Proclamation of Blockade against Southern Ports

This document is Abraham Lincoln’s proclamation to seal off the Southern Ports from international trade. This blockade severely limited the transportation of raw cotton to Europe 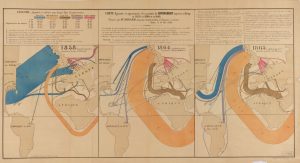 This map was made by French civil engineer Charles Joseph Minard. The map shows flow of raw cotton prior, during, and after the war are depicted as colored bands. The width of the bands represents the amount of raw cotton imported, with one millimeter representing 5000 barrels. Prior to the U.S. Civil War, most of Europe relied exclusively on the U.S. South as the sole source of this indispensable raw material (blue band). Export blockades during the war changed global trade patterns, instigating a fierce competition between the U.S. (blue band), India and (orange band), and Egypt (brown band) 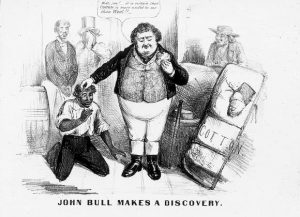 This source is an anti-British cartoon the print probably appeared in late 1862 or early 1863, when a cotton shortage caused by the Union blockade started to cripple the English textile industry. Diplomatic efforts were then under way by the South to win support for the Confederacy from Britain. Here the artist predicts that the British would abandon its humanitarian antislavery stance in favor of economic self-interest. 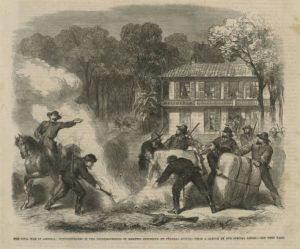 Cotton burners in the Neighborhood of Memphis Surprised by Federal Scouts.

Confederate leaders believed an embargo and shortage of cotton would lead Great Britain and France would intervene in the Civil War as well as recognize the Confederacy as an independent country. In order to create a shortage, around 2.5 million bales of cotton were burned. This reduced the amount of cotton bales exported to Europe from 3 million bales in 1860 to mere thousands a year later. Known as King Cotton diplomacy, this venture would severely backfire on the South.